Who Is Success With Sam?

Sam, born and raised in the United Kingdom, started his journey from humble beginnings in South East London. Growing up on a council estate to a single mother who tried her best for him and his siblings, but from the moment he first used the internet he knew the potential of how this device known as the ‘home computer’ could change his entire life.

Sam’s first online business was selling t-shirts on eBay that he had purchased from various different outlet shops at a discounted price and he was able to do this for 2 years whilst studying his A-levels at college. This wasn’t always easy as this was his first experience with running an online business but he was still able to make an extra £500 per month, which was a lot for an 18-year-old college student. This was his first sign that he could be successful as an eBay seller and that he was going to pursue it over the long term, because the process was quite simple. Once you figure out what is selling well using a product research tool, then simply list those products on your eBay store. You can now have access to over 100 million visitors that are going onto eBay daily with their credit card in their hand ready to place an order. It seemed like a no-brainer to him. But after he finished doing his A-levels, he went on to attend University to study Accounting and Finance, as this is what his mother wanted from him, so to make her happy he had put his eBay business dreams on hold so he could focus on his education, but once his degree was coming to an end, he was realising that he needed to figure something out and have a plan for when he finished university, so he started a brand new eBay store from scratch and built things back up from ground zero.

All the momentum he had with the first eBay business had completely gone, and he had to build his eBay feedback score, customer base and eBay listings ranking back up. But he was determined to grow his eBay business due to all the eBay success stories he had seen of people making £1 million per month from a business they started in their houses. These stories reminded him that running an eBay store full time was definitely possible.

The start of Sam’s eBay journey

Initially, he started listing items on eBay and dropshipping them directly from his supplier to the customer. Dropshipping is when you do not need to buy the inventory up front, because once you make a sale your supplier will pick, pack and ship the order to the customer. This was a great way to get started as he was able to test which items were winning products without the risk of investing in stock straight away, and once he was able to now find a particular product that was selling well, he could buy the product in bulk, knowing that there would be a high chance he would be able to sell them effortlessly. 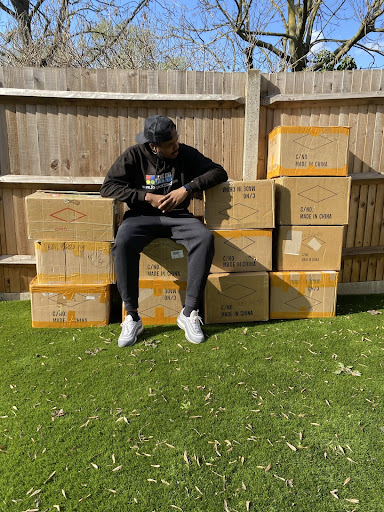 However, things didn’t necessarily take off from the start, so he had to work a 9-5 job as a bookkeeper in the meantime to pay the bills, but it was actually during this time he was able to learn valuable business skills that he was implementing to his eBay side hustle.  Skills such as digital marketing, search engine optimisation, customer service and, most importantly, how to make a profit over the long term. So, after a year of balancing his eBay business during the evenings and weekends whilst working his 9-5 job, he was able to grow his sales to over $40,000 per month in revenue.

At this point, his eBay store had grown so much and was taking so much of his time that he handed in his notice to his manager and left his day job to pursue his dreams of building an e-commerce business empire.

He now manages an e-commerce business that sells on platforms like eBay, Shopify and Amazon and has since grossed over $1.5 million.

Sam believes that eBay is a great option for most beginners that are looking to start an ecommerce business, but eventually, you need to have a long-term mindset which involves creating multiple streams of income. That is why it is also important to remember to build a real brand on platforms like Amazon and Shopify.

Sam also dedicates a lot of his time to creating content on his Social media and his YouTube channel Success with Sam’ to help others achieve success with their own ecommerce business.

Here are his 3 beginner tips for eBay Success:

Here are a few eBay Seller Tips from Sam, to get you started.

1. Believe it is possible

Most people say they want to start an eBay business, but in the back of their minds they think that it won’t be possible. Having this type of mindset will only hinder your success as an eBay seller. Because throughout the entire process you will always have the mindset that things are not going to work out, which will cause you not to put maximum effort into growing your eBay business.

One main reason why Sam believed it was possible to be successful as an eBay seller is the fact that he could see that there were eBay stores that were making a life-changing amount of money. So if they figured it out, why can’t you?

The key to achieving success with things in life requires a certain level of laser focus. If there is one thing that slows down a lot of people’s success on eBay is the fact that they get distracted and fall victim to ‘shiny object syndrome’. The ability to make money online with any method, including an eBay business, requires laser focus.

Having a desire to be successful with an eBay business is not enough. Sam learnt early on that the only way that his life would change could only happen after taking massive action. This has been one of the key components to growing his eBay business. Waking up every day and making sure that you work on the most important task for your eBay store to take it to the next level is one of the best ways to increase the likelihood of eBay success.